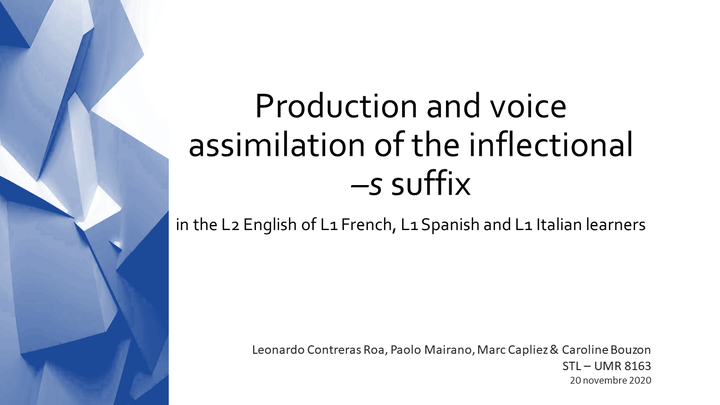 This study investigates the pronunciation of the -s inflectional suffix in L2 English by L1 French, L1 Italian and L1 Spanish learners. As is well known, this suffix is used in English to express plurality, 3rd person singular, and genitive. Phonologically, it is subject to a progressive voice assimilation rule, and is therefore pronounced as /s/ in front of voiceless consonants, and /z/ in front of voiced consonants.

In our analysis we focus on (i) whether the suffix is pronounced at all in learners' productions (morphological patterns), and (b) if the voicing assimilation rule is reproduced accurately by learners (phonological patterns). The comparison of L1 French, L1 Italian and L1 Spanish learners is especially interesting due to some phonological and morphological characteristics of these three L1s. Morphologically, the -s suffix exists in French and Spanish to mark plurality (but it is often silent in French), while Italian marks plurality via synthetic suffixes expressing gender and number.

We therefore expect that L1 Spanish speakers will show a higher percentage of -s pronunciations, while French and Italian learners may leave out -s more often. Phonologically, French has a phonemic contrast opposing /s/ and /z/, while Northern Italian has [s] and [z] as contextual allophones, and Spanish only has /s/ (with a partially voiced non-obligatory variant next to voiced phonemes used in casual speech). Therefore, given the different distributions of /s, z/ in the participants’ L1s, and based on predictions of the SLM and PAM models of L2 phonology acquisition, we expected that L1 French and L1 Italian learners would find it easier than L1 Spanish learners to reproduce the outcome of the voice assimilation rule. We analysed data from the IPCE-IPAC corpus of 15 L1 French learners, 15 L1 Italian learners, and 10 L1 Spanish learners. We computed the percentage of -s suffix realizations, and we measured periodicity in the signal for segments corresponding to the -s suffix.

Our predictions were only partially reflected by the results: morphologically, L1 Spanish learners showed higher percentages of -s realizations than L1 French and L1 Italian learners. Phonologically, L1 French learners (who have /s/ and /z/ in their L1 as phonemes occurring in word-final position) were the most successful in producing the expected patterns of periodicity. However, L1 Spanish learners were found to be better than L1 Italian learners in doing so. We propose that such results are due to the different phonotactic constraints affecting [s] and [z] in the learners’ L1s: since Italian phonotactics does not allow [z] in word-final position, our L1 Italian participants produced realizations that are virtually aperiodic. These results have potential repercussions on models of L2 phonology acquisition, since they suggest that L1 phonotactic constraints are an important factor accounting for the pronunciation of an L2. 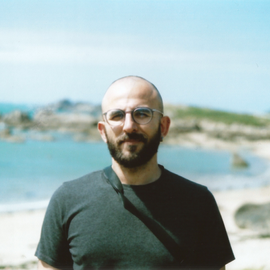 Next
On Prosody and Reported Speech: Towards an Exploratory Methodology
Previous
The Corpus InterLangue project: storing language learner data in a Huma-Num Nakala database for automatic online retrieval